“The only simple things about the Cu29 are its functions. For the rest, there was no compromise.”

Copper has been known across cultures for millennia for its benefits to the body and its potential to soothe certain ailments. Inspired by these beliefs, the Alchemists imagined how a timepiece could capture their essence, which led them to develop the Cuprum 479, a new innovative horological alloy, but also to reflect on its field of expression in their works. In this case, by placing it in contact with the skin thanks to the bottom of the case, made entirely with the alloy, delivering their interpretation of this historical lore.

The case of the Cu29 is crafted exclusively in Cuprum 479. The crown is also made of Cuprum, as well as the pin buckle, bottom plate, dial’s base, hours, minutes and seconds hands as well as the majority of the bridges. The Cu29 is a true horological masterpiece from Hervé Schlüchter, following traditional horological art methods and teachings transmitted from Philippe Dufour, a Master of the craft, which the Alchemists’ watchmakers strive to master perfectly. Convinced that the emotion they invest in the creation of the timepiece will be transmitted to its wearer.

The Cu29 is an invitation to a journey transcending time: the quest for the essential.

The Cu29 represents a demonstration of centuries-old watchmaking skills and an ode to traditional horological arts. This inaugural piece is the precursor of the Alchemists’ future and of their humble will to preserve a horological heritage. 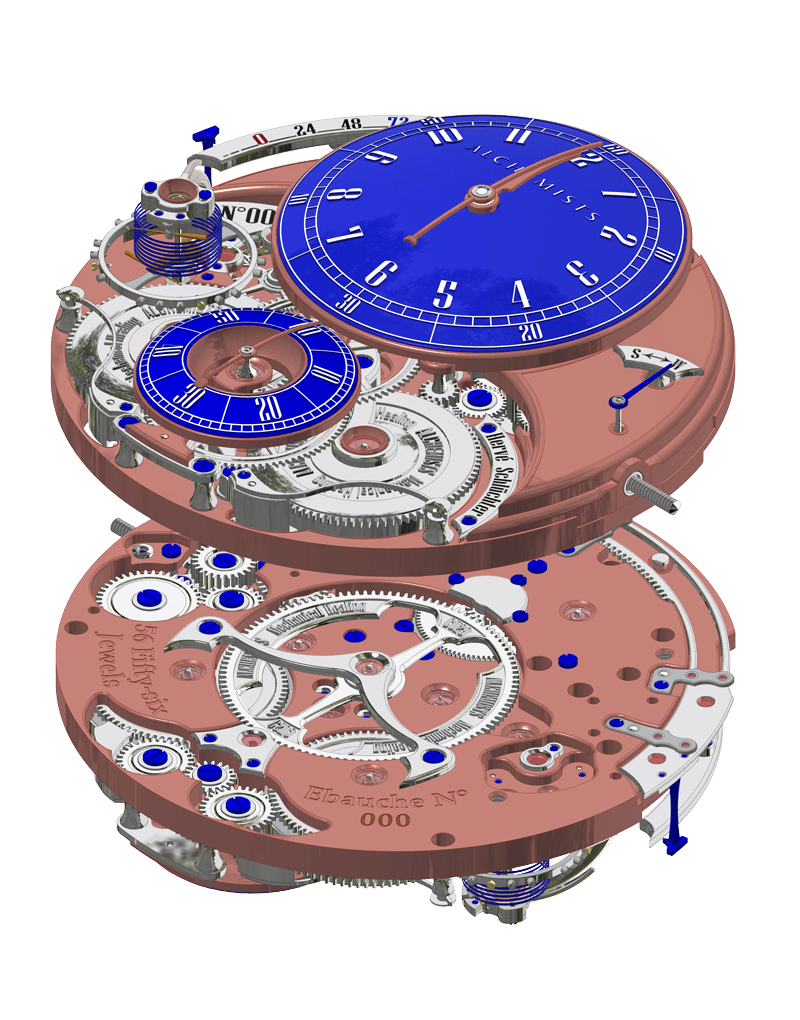 The atypical arrangement of the Cu29’s functions has led to the total transposition of the movement’s architecture. The manufacture calibre is completely inverted compared to the traditional design in which the hours, minutes and seconds are in the centre and the double barrels linked in parallel extend directly from the winding stem.

As in traditional horological timepieces, the Cu29 is constructed around notions such as volume and symmetry. This 3D architecture is highlighted by the first “atmosphere crystal” of watchmaking. 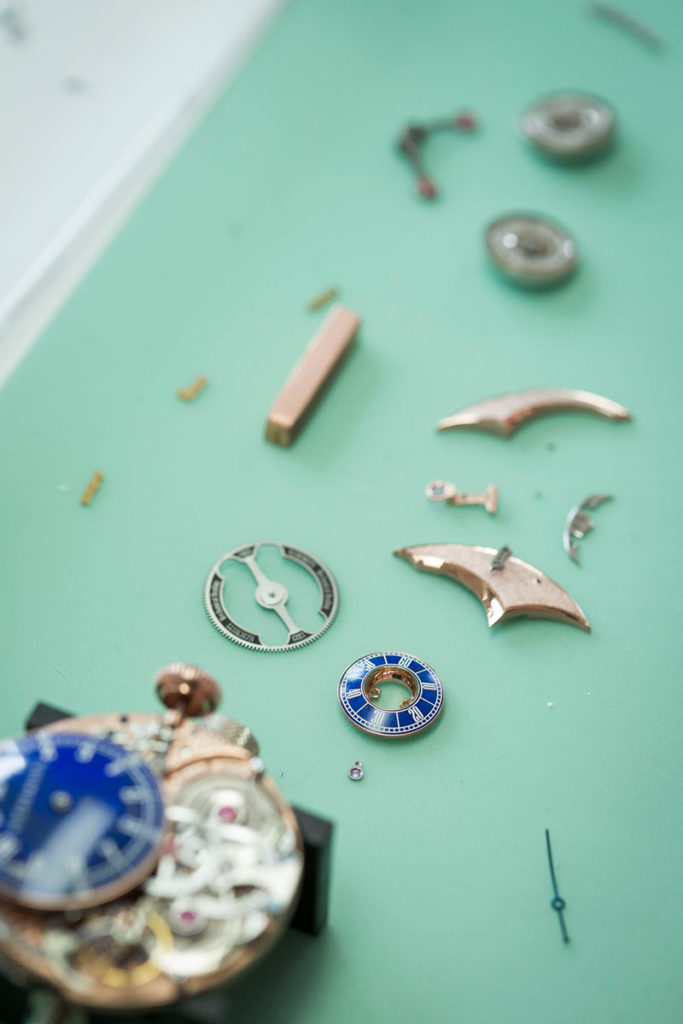 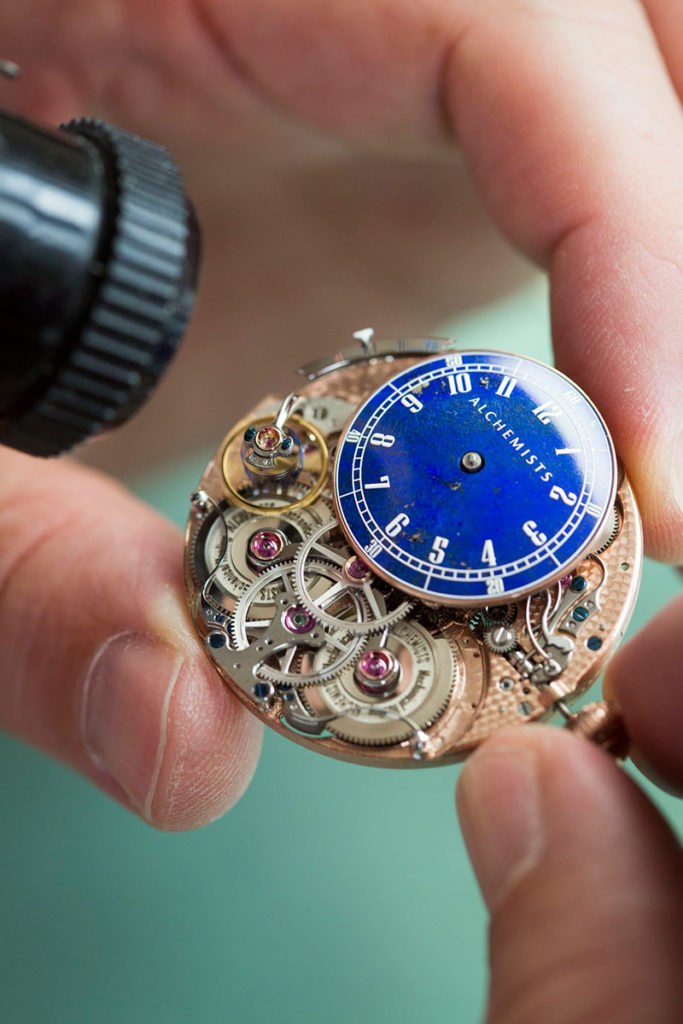 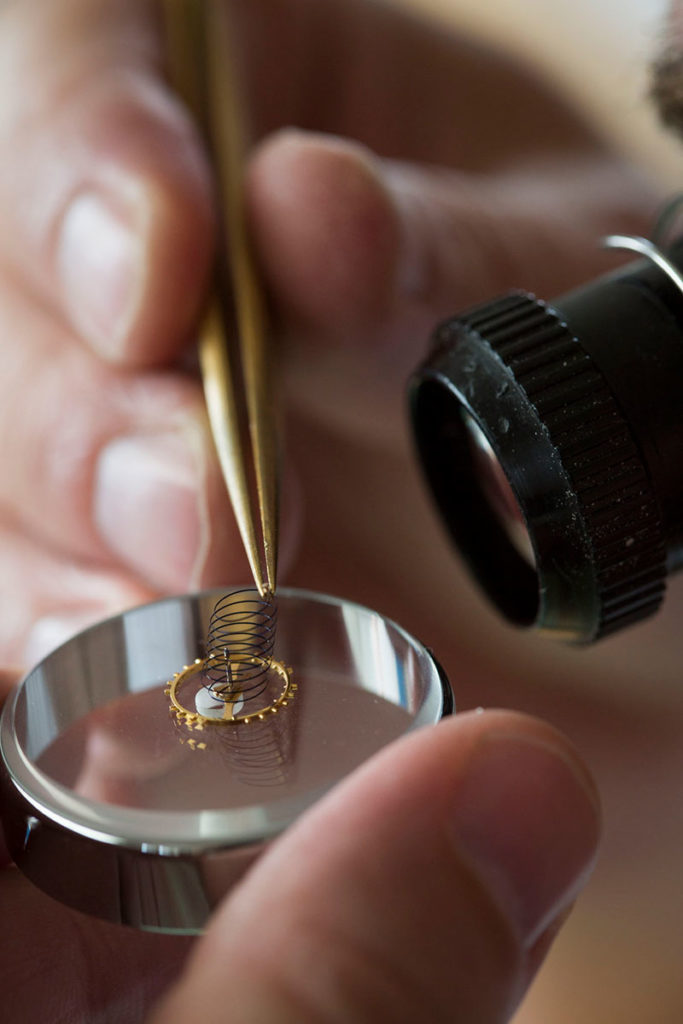 In the Cu29, the symmetry of the double barrel at 6 o’clock offers a totally unique visual spectacle during the winding process, which allows you to see each spring of the suspended moustache-shaped pawl wind with each click of the ratchet until the timepiece is fully wound. 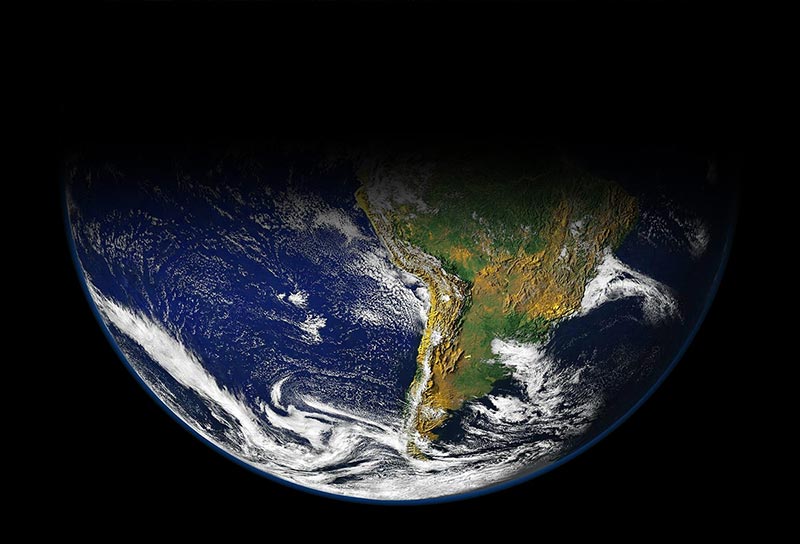 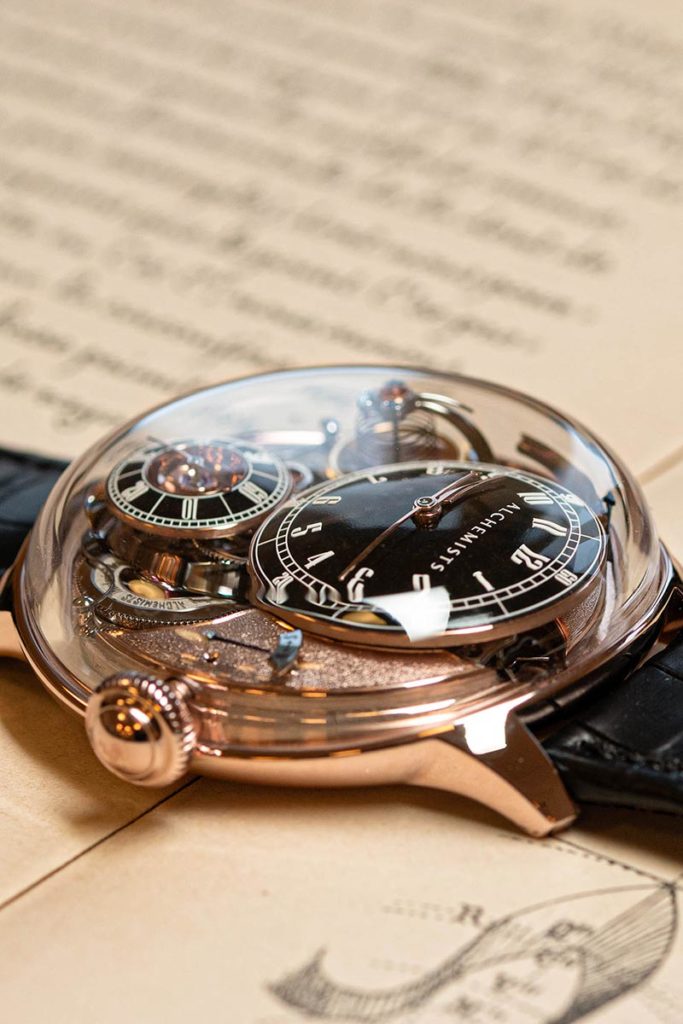 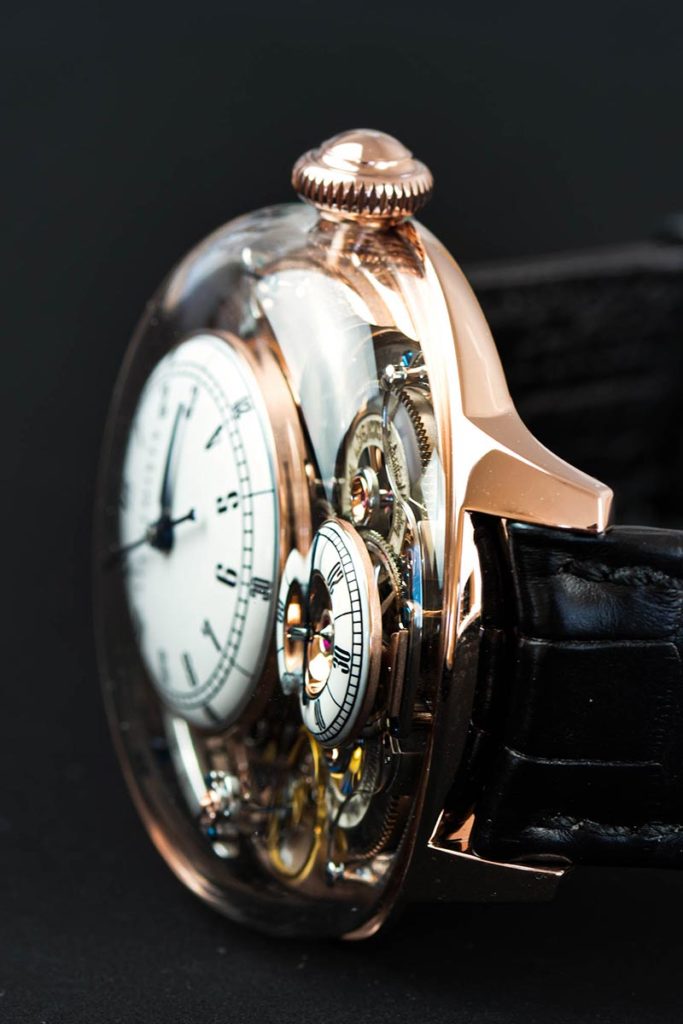 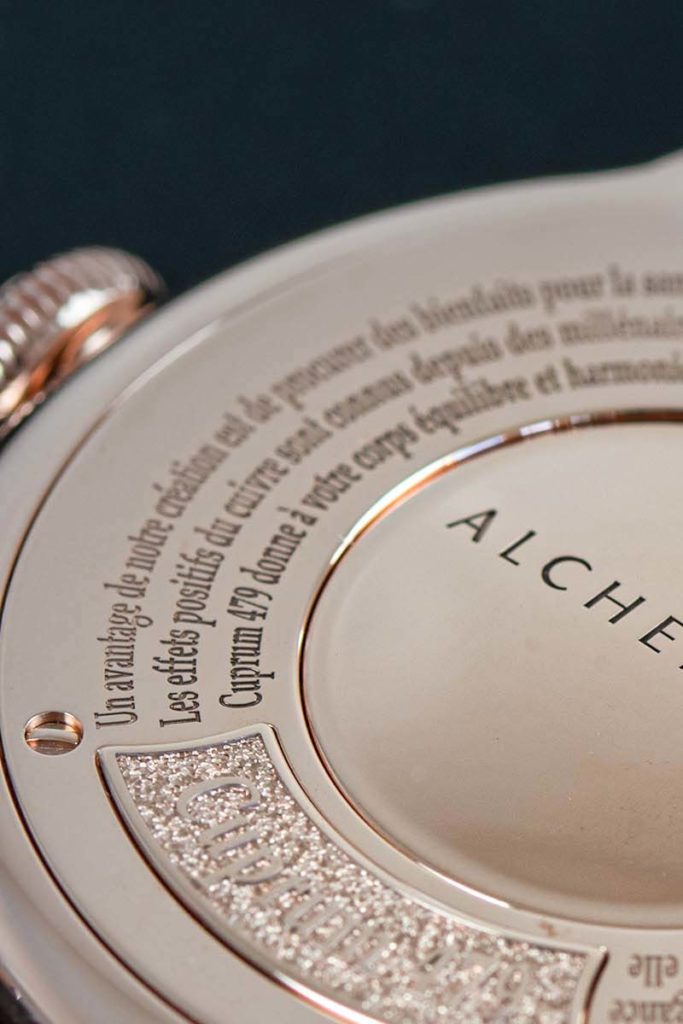 The Cu29 is a creation that can be highly personalized by the integration of dials, offered in different stones, up to the customers’ preferences. The selection of these gemstones was guided by their elegance, but also by the primary inspiration around the concept of the timepiece.

The notion of “lithotherapy” is recurrent in the usages of certain cultures since time immemorial. It appears that certain people may be sensible to certain kinds of stones and crystals, by being in contact or in close proximity with them. While no scientific proof backs up this theory, these gemstones would have beneficial effects on these persons’ well-being and could promote certain states of mind.

The Alchemists, intrigued by this philosophy wanted to give their interpretation and thus went on a quest to find sublime gemstones to ornate the dials of the Cu29. All while being guided by the eventuality that these stones might also favor certain vertues for their wearers.

The hours, minutes and seconds hands are rounded by hand and then blued and lacquered. The power reserve and selector dial is made of black-polished steel adorned with a lacquered engraving. The double barrels linked in parallel are bevelled and polished by hand. Each calibre leaving the Alchemists’ workshop is then individually numbered.

All the Cu29’s parts thus obtain genuine added value from the watchmaker’s hand. The Alchemists have no finishing workshop: the watchmaker receives the kit for each watch as a “blank”, meaning non-finished, and must do the hand-finishing him- or herself, as done back in the glory days of fine watchmaking and which very few traditional Maisons still know how to do today. 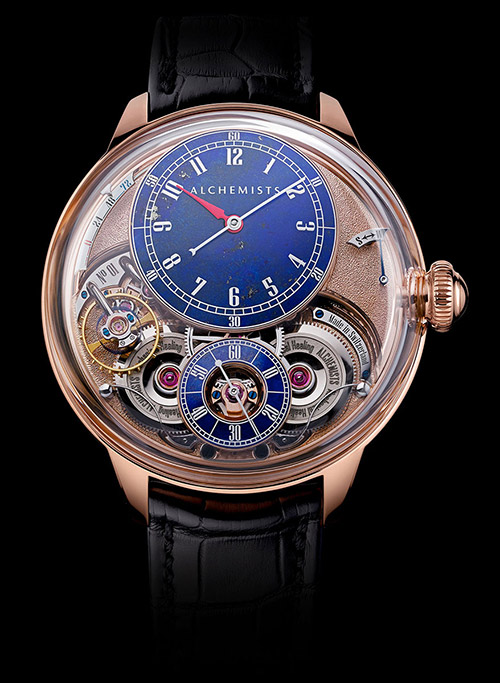 Each Cu29 is made to order.  Crafted by our skilled watchmakers and individually numbered.

Specifications Sheet
Inquire
Scroll to Top
We use cookies to ensure that we give you the best experience on our website. If you continue to use this site we will assume that you are happy with it.OkPrivacy policy